Talk Nerdy to Me: How Much Are You Reading?

Talk Nerdy to Me

This week in Talk Nerdy to Me we’re going to look at what cards have been the read the most this semester. This will give us a good idea of how reading habits change as the semester progresses. 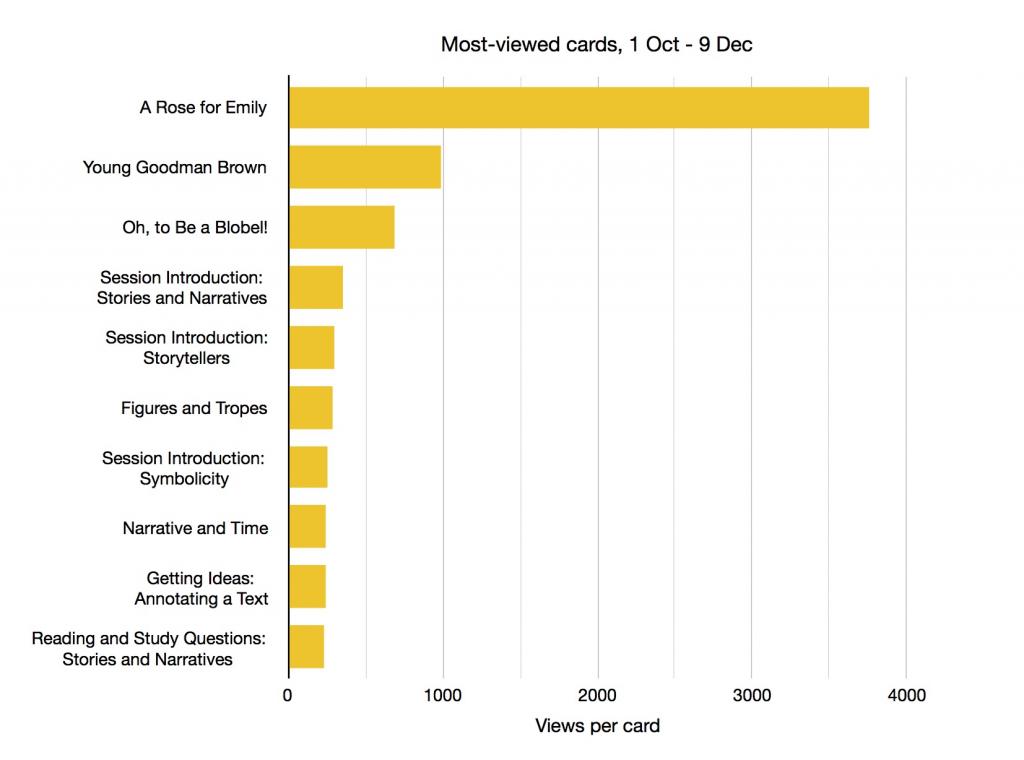 “A Rose for Emily” quite literally jumps out. It has almost four times as many views as the second most read text! While it might just be Faulkner’s high quality writing, I think it’s safe to assume that because it was the first piece of literature for the semester, everyone wanted to make sure they’d really gotten a handle on it. Hawthorne’s “Young Goodman Brown” is next, and it got roughly four times as many views as the texts in the bottom of the top ten. “Oh, to Be a Blobel!” rounds out the top three and the literary texts in our data set today—and is also far ahead of anything below it.

Tied with the top three in terms of genre, the 4th, 5th, and 7th place texts are all session introductions. It should not be surprising that some of the most read texts are the first ones you have to open—and that also indicates that most of you are reading the sessions linearly, which also isn’t surprising. However, they’re clearly less read than the top three—and that also isn’t terribly surprising, since the real meat of the week comes later.

Then we have our four oddballs: two theory texts, a methodological one, and the reading and study questions for one week. This could represent a couple of things: firstly, that there’s more of an even distribution of views after the top three, which seems to be implied by the flattening of the bottom half of the graph, and so these are just a random selection of texts from SHRIMP; or secondly, that you all aren’t coming back to read over later texts as much, for any number of reasons ranging from taking better notes to having less time as the semester draws on. Most likely, it’s a little bit of both.