Talk Canon to Me: Let's Analyze the LC-1 Canon!

After the conclusion of the #readingsforthebreak, which we took from the Literature and Culture I-list of exemplary texts for each period, we thought it’s time for some statistics. We had some thought provoking conversations about diversity and representation regarding our reading recommendations and this prompted us to take a closer look at the canon, so here it is: #talkcanontome! We have six periods to look at, so let’s dive into it! 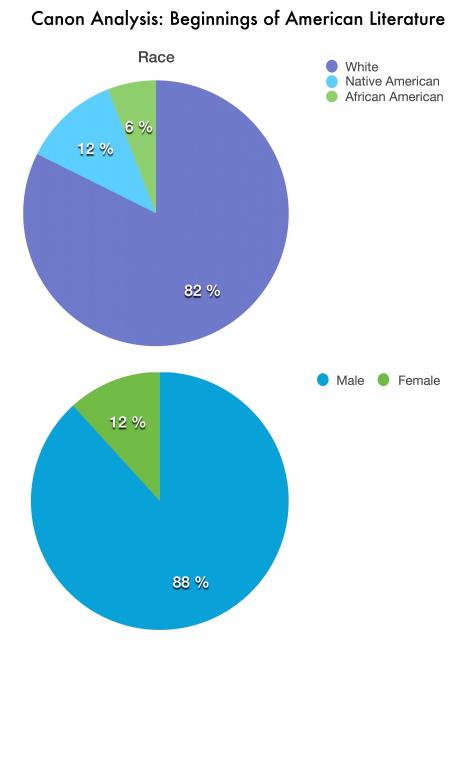 Starting out with early ‘American’ writings, we can see that over 80% of the writers featured in this list are white and/or male. Many texts on this list come from early European explorers and settlers of the North American continent, such as Christopher Columbus, John Smith, and later John Winthrop and Cotton Mather, who were Puritan leaders. It makes sense that male authors are overrepresented in this list – after all, it was very difficult for a woman at the time to hold any position of power that would have been necessary to be published. However, we do have two female writers: Ann Bradstreet, a Puritan woman who wrote letters and poems about life in the settlements of New England, and Mary Rowlandson, who wrote one of the first captivity narratives, telling the story of her abduction by Native Americans. The only featured text written by an African American author is the tale of the life of Gustavus Vassa, who was an escaped slave. Notably, there are also two texts stemming from Native American oral traditions on this list: creation myths from the Zuni and the Navajo peoples.

Moving on the next literary period, the 19th Century, we can see that white authors are still overrepresented. Before the Civil War (and honestly for some time afterwards), getting a book published was infinitely more difficult for an African American author than a white one. Thus, this list features only three African American authors, but they are all very much worth reading: Frederick Douglass, Harriet Jacobs, and William Wells Brown. Of course, some other great writers also lived during this period – that’s why we featured Walt Whitman and Emily Dickinson as suggestions for the #readingsforthebreak! Other recognizable classics from this period include Harriet Beecher Stowe’s Uncle Tom’s Cabin, Washington Irving’s The Legend of Sleepy Hollow, and Herman Melville’s epic Moby Dick. Overall, the list for this period features 32% female authors, which is a pronounced leap from the 12% in the previous period. 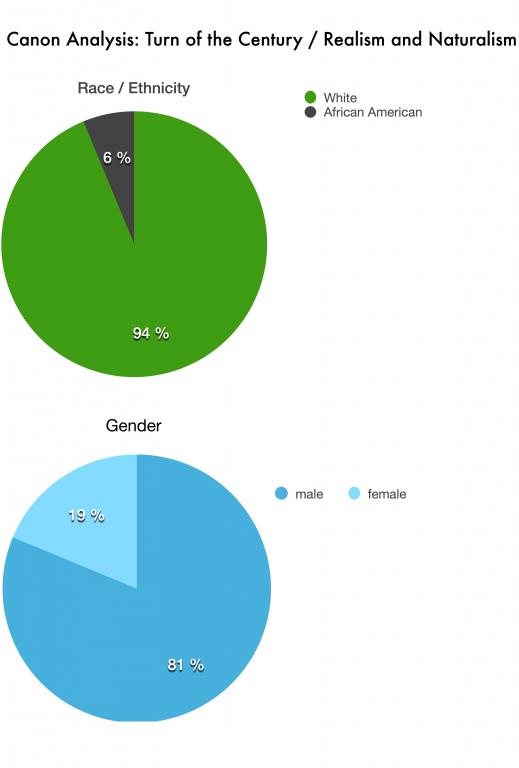 Unfortunately, the increase in female authors is not linear, and the next period is once again more male-dominated, with 81% of the authors on the list being men. Representing another important period of American literature, albeit a short one, the Turn of the Century-list features another two of our #readingsforthebreak – who remembers our grumpy Mark Twain-Shrimpy? And Shrimpy howling at the moon for Jack London’s Call of the Wild? The analysis of this list revealed, that it is the least representative of the six - only one African American author is to be found on this list, Paul Laurence Dunbar, whose work earned him national praise and recognition. However, the lack of representation does not mean that there aren’t great authors to be found here – some of the most prolific realists, such as Henry James, Upton Sinclair, and Frank Norris, are listed, but also two fantastic female writers: Charlotte Perkins Gilman, an early feminist whose short story “The Yellow Wallpaper” is a must-read, and Kate Chopin.

Moving on to Modernism, we find a much longer list, which features a far more diverse collection of authors. In large part thanks to the Harlem Renaissance we find that 31% of authors on this list are African American, including Langston Hughes, Zora Neale Hurston, and Alain Locke. With Black Elk we also finally find Native Americans coming back into the canon after being featured only once on the first list. Many of the most well-known American and transatlantic writers lived and worked during this period, including of course Ernest Hemingway, F. Scott Fitzgerald, T.S. Eliot, William Faulkner, and John Steinbeck. However, gender representation has stayed the same from the previous period, with only 19% of the authors featured being women. The women featured include Hilda Doolittle, Nella Larsen, and of course Gertrude Stein, whose house in Paris was a hub for the most prolific transatlantic writers to meet and discuss the new and radical ideas that Modernism ushered in. 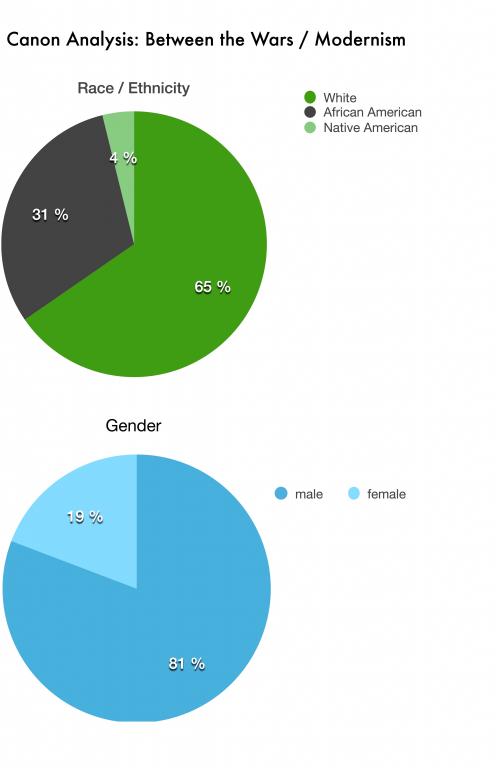 We are rapidly approaching our current time, with only one more period separating us, the Postwar Years. While there are still more African American authors represented than in the first three periods, there certainly are less on the list than during Modernism. We do however find the brilliant work of Ralph Ellison (who wrote Invisible Man), James Baldwin, Robert Hayden, and Amiri Baraka. 30% of the authors on the list are female, and one of them is Sylvia Plath, whose novel The Bell Jar is as heartbreaking and intriguing as her poetry. This is also the period of the Beatniks, including Allen Ginsberg, and of the all-time favorite The Catcher in the Rye by J.D. Salinger - Shrimpy even dressed up as Holden Caulfield once!

The list for the last period that we have a 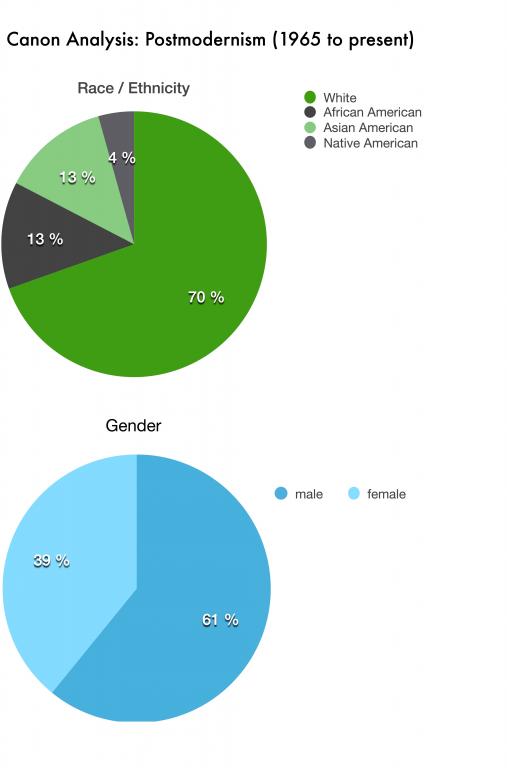 Overall, it seems clear that the LC I canon overrepresents  both male and white authors – a fact that is hard to deny when looking at the statistics. As we move on into the present, with challenges to the canon and new additions every decade, this one-sided picture starts to break up to represent the multitude of voices present in America, and we hope that this continues on into the future – until then, keep reading!